What is Positive Train Control Program?

What is the Positive Train Control Program? The Rail Safety Improvement Act of 2008 (RSIA) mandates that Positive Train Control (PTC) be implemented across a significant portion of the Nation’s rail industry by December 31, 2015. Lines requiring PTC are essentially Class I railroad main lines (i.e., over which 5 million or more gross tons are transported annually) that handle any poisonous-inhalation-hazardous (PIH) materials; and, any railroad main lines over which regularly scheduled intercity passenger or commuter rail services are provided. PTC is expected to be implemented over a total of approximately 70,000 miles of track.

PTC refers to communication-based/processor-based train control technology that provides a system capable of reliably and functionally preventing train-to-train collisions, overspeed derailments, incursions into established work zone limits, and the movement of a train through a main line switch in the improper position. PTC systems are required, as applicable, to perform other additional specified functions. PTC systems vary widely in complexity and sophistication based on the level of automation and functionality they implement, the system architecture used, the wayside system upon which they are based (e.g., non-signaled, block signal, cab signal, etc.), and the degree of train control they are capable of assuming.

Prior to October 2008, PTC systems were voluntarily tested or installed by various carriers, albeit at a slower pace. However, the RSIA (signed into law by then President Bush on October 16, 2008, as Public Law 110-432) has mandated the widespread installation of PTC systems by December 2015. 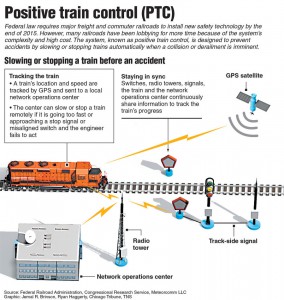 Initially, 41 railroads submitted PTC Implementation Plans. FRA reviewed all submissions and initially denied approval of all PTC Implementation Plans for cause before the 90-day statutory deadline for review. Of the 41 resubmissions, FRA approved 24 plans without conditions, provisionally approved 1 plan with conditions, provisionally approved 14 plans submitted with Notices of Product Intent pending resubmission with a PTC Development Plan within 270 days, and disapproved 2 plans without prejudice. FRA staff continued to work with those two railroads to establish acceptable plans. FRA is currently working directly with two additional

FRA has issued Type Approvals and System Certifications for the Advanced Civil Speed Enforcement System (ACSES) Version II to Amtrak, and for the Electronic Train Management System (ETMS) Configuration 6 to the BNSF Railway. FRA has also issued Type Approvals to CSX Transportation, Norfolk Southern Railway, and Union Pacific Railroad, collectively, for the Interoperable Electronic Train Management System (I-ETMS), which a significant number of other railroads are also intending to implement. FRA is also in the final process of working out resolution of a few issues to allow for the granting of Type Approval and System Certification for the Incremental Train Control System (ITCS) Amtrak is using on its Michigan Line, and will be expanding such use beyond that. FRA staff members are continuing to provide both informal and formal technical assistance to various railroads regarding successful creation of PTC Development Plans and even initial versions of PTC Safety Plans; as well as supporting both laboratory and field PTC system development and implementation testing.

PTC Systems in the United States

ACSES (Advanced Civil Speed Enforcement System). A transponder-based system, in use on Amtrak’s Northeast Corridor originally put into use on the Northeast Corridor by the specific requirements of an Order of Particular Applicability. (Type Approved and Certified by FRA.)

ETMS (Electronic Train Management System). A GPS- and communications-based system being deployed by BNSF Railway, originally put into use by the specific requirements of 49 CFR Part 236, Subpart H. (Type Approved and Certified by FRA for restricted use.)

I-ETMS (formerly called Vital Electronic Train Management System). A GPS- and communications-based system, not yet ready for deployment. It is the system of choice for CSX Transportation, Norfolk Southern Railway, and Union Pacific Railroad. BNSF Railway is to upgrade to it when software is available, various passenger/commuter and other railroads are adopting it for compatibility and interoperability. (Type Approved by FRA.)

ITCS (Incremental Train Control System). A GPS- and communications-based system used by Amtrak on its Michigan line, authorized for passenger train speeds up to 110 mph, originally put into use by the specific requirements of an FRA-approved waiver. ITCS certification through Amtrak’s request for expedited certification process is pending successful resolution of a few remaining issues prior to FRA approval for certification.

PTC Document Submission Railroads meeting the requirements for PTC implementation must submit for FRA approval various PTC-related documents. Those documents, redacted for public viewing to the extent determined necessary by the railroad, are available on www.regulations.gov under each railroad’s PTC docket number. A listing of those docket numbers along with information surrounding the latest date of the various documents submitted may be found at the link below. http://www.fra.dot.gov/eLib/Details/L04297

Financial Assistance PTC systems are eligible for funding under the Railroad Rehabilitation and Improvement Financing Program; however; no railroads have approached FRA for funding of PTC projects using this program. PL110-432 has also authorized Railroad Safety Technology Grants that can be used to support PTC projects at $50 million per year from 2009 to 2013; however, the funds have not yet been appropriated. For further information contact: Mr. Robert Scieszinski, PTC Branch Chief (360) 883-5811. 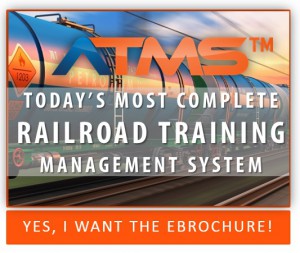