If you’re like me, your Facebook and Twitter timelines are filled with friends, colleagues and celebrities who suffer from Airport Rage. Ordinarily good-natured, they turn into a cross between Alec Baldwin and Gerard Depardieu when their flight is late.

Sometimes, they have every reason to be upset (like the guy whose dog was lost in transit somewhere between Cuba and Canada). But many other instances of Airport Rage can be prevented with FiveThirtyEight’s fastest-flights interactive. It’ll tell you which airlines are most likely to get you to your destination on time. Over the past year, for example, Virgin America has flown from San Francisco to Los Angeles an average of 28 minutes faster than Southwest Airlines, after accounting for delays and cancellations.

For way more detail about how this works — and why we think our method is better than on-time statistics you’ll see elsewhere — you can check out our previous articles here and here. But the basics are pretty straightforward:

In our method, airlines can’t cheat by padding their schedules and “beating” an unrealistically long flight time. Instead, we compare their actual travel times against other airlines on the same routes. 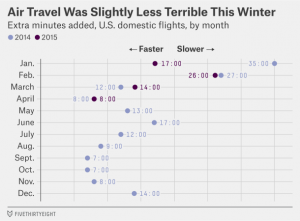 Likewise, we adjust for how hard it is to fly out of different airports at different times of the year. It’s much easier to fly out of Honolulu in June than Chicago in January, for example. Some airlines that perform poorly in conventional statistics, such as JetBlue, do relatively well in ours because they’re making the most out of difficult conditions.
We account for cancellations and diverted flights, which usually cost travelers the equivalent of several hours. They’re far worse than regular delays but are all but ignored in most on-time statistics.
The rest of this article will take a 35,000-foot view of how airlines and airports have performed over the past year, according to the latest government data, which covers most domestic flights from May 2014 through April 2015. We’ll also describe how the numbers have changed since our initial release, which covered January through December 2014. If you want more detail about a particular route — which airline is fastest out of LaGuardia, say, or which one you should fly from Atlanta to Dallas — you can find that at our interactive.

First, some good news. Passengers had a slightly easier time this winter than they did in 2014. By our calculation method, flights were an average of 17 minutes late in January 2015, for example. That’s not great, but it’s much better than the average 35-minute delay they experienced in January 2014. June and July will be a big test for the industry, as passenger volumes increase while stormier weather sets in. Feature Photo Credit: Planefinder.net Read full article >> 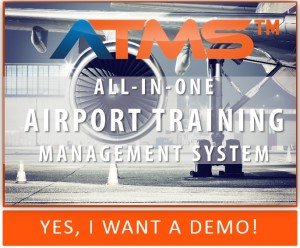